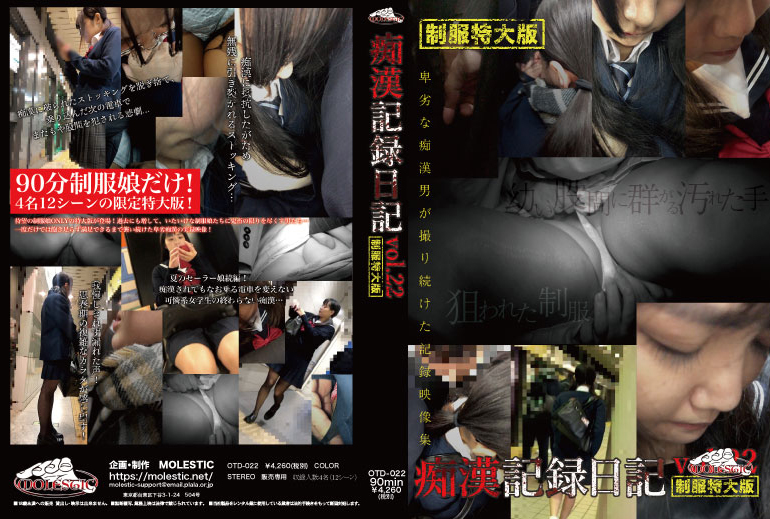 Finally came!
The special edition “Uniform Uniform Girl Extra Large Edition” was the most requested voice in the history of the Molester Record Diary series!
All targets are uniform girls!
Uniform daughter cry! Uniform girl feels! Uniform daughter gets wet!
Dirty hands of molesters swarm in the blue crotch with the complex nature of adolescence!
The stockings are broken brutally, the fingers are mercilessly put in the vagina and they are stirred as desired ...
Glasses girl who is attacked not only once, but twice in a row ... Incompetent face girl who is suppressed from going to school and is fucked three times ...
No problem with their feelings! 90 minutes of a devil's business!
Watch hidden truth videos secretly taking place on the train used for commuting!

[First person]
She didn't pay the man's hand, but the last ... The crotch that was squeezed and fingered with her stockings. I can't feel or make a noise, but my body that just kept putting it up collapses! Unconsciously moving body, uncontrollable breath! The desire of a young female controlled by a creature called a man awakens!
[Second person: Part.1]
Summer sailor girl sequel! Wearing spats and thinking of being raw feet, show resistance to men covered in desire ... Men runaway seeking raw skin blocked by thick fabric! Men's fingers swarm to the hips and cracks that have been boldly exposed! What she thinks of the overflowing lewd juice, the sound of the wet sound, the reaction of the body that betrays consciousness ...
[Second person: Part.2]
Sailor girl whose commuting was suppressed! Countless hands where you are ambushed and boarded! Black stockings that are torn to pieces! A finger inserted from tattered stockings ... her crotch, which she thought, quietly responded! Sensitive projections are stimulated and the feet stick unexpectedly, the expression that hides and is all obscene uniform girls!
[Third person]
Uniform girl already surrounded at the point where I got on. As usual, we reach for the outlet of the desire, but the man is frustrated by the desperate resistance! Stockings torn to anger! A spooky frightened by unrelenting guesswork! Stockings that bite, smashing sounds, a relentless figure floating in pure white underwear ... See all the horror!
[4th person: Part 1]
A twin-tailed daughter who looks serious with glasses. The desire of a man explodes to see him fearfully behind! After enjoying the crotch with plenty of cloth, stockings that can be broken as much as you want to claim as your own! Even though she is surprised and can not speak, further tragedy awaits her uniform daughter who is desperately patient!
[4th person: Part 2]
Take off your torn stockings in the bathroom and don't miss the sneaky man trying to get on the train again! There is no escape for the twin-tailed daughter who has been certified as an OK daughter ... A finger is thrust into a narrow vagina hole, and a small protrusion is rolled at the fingertip ... A feeling of disgust and a steep look ... but! Blue crotch that feels the opposite of feelings! She knows her own sex with her feet sticking, leaking sighs, and unexpected pant voice!