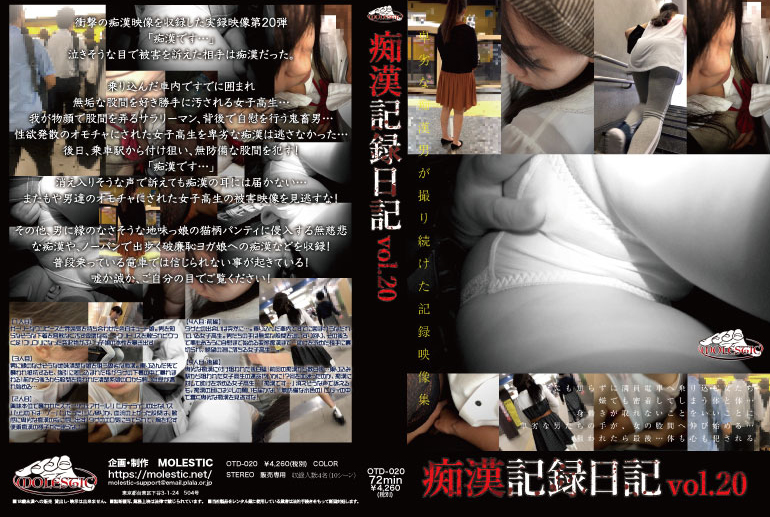 The 20th memoir video that contains a shocking molester video
"I'm a pervert ..."
The other person who complained of damage with crying eyes was a molester.

A girl who is already surrounded by the inside of the boarded car and is innocently stained with an innocent crotch ● Raw…
A salaried man who plays with her crotch with her face, a girl ● A devil man who even masturbates behind the raw ... A girl who was made a toy of libido ● A sneaky molester did not miss ...
Later, aim from the boarding station, commit the defenseless crotch!
"I'm a pervert ..."
Even if you appeal with a voice that seems to disappear, it will not reach the ears of the pervert ...
A girl who has become a toy of men again ● Do not miss the damage video of the raw!
In addition, it includes obscene finger molesters that invade a cat pattern panty of a plain girl who seems to have no connection to men, and sanctioned molesters to shameless yoga girls who go out in no-pan!
Unbelievable things are happening on the trains I usually ride! Please see with your own eyes whether it is a lie or sincerity!

[First person]
Fair-skinned cute girl with girly dress and atmosphere. An obscene finger that mercilessly smears underwear that doesn't know a man ... Feet that touches the clitoris and gets angry! The protuberances that became crispy reveal the nature of the first daughter!
[Second person]
Sportswear girl attacked with interest! Under the spats where the panty line does not come out ... it was no bread! After going back to the gym, the crotch with increased blood flow feels sensitively to the fingers of a sneaky molester! The appearance of the piggyback molester who commits the eroticism of the tag and commits the chest is unbearable ...
[Third person]
A sneaky molester who aims at a simple neat girl who seems to have no connection with a man. Although you are attacked and resisted at the point where you boarded, the finger that was forcibly inserted rampaged in the underwear of the tag! A hot sigh from the mouth of a neat girl who was aimed at the crotch from the back ...
[4th person: the first part]
Suddenly I met Tage. A girl who is already surrounded by the boarding car. The men's hands crawl through the innocent crotch and even the perverted molester that begins to masturbate behind it ... ... a girl who is betrayed by a partner who asks for help and falls into a trap of despair.
[4th person: Part 2]
A later edition aimed at a sneaky molester! A few days after the last molester… A girl targeted from the boarding station ● How fate of life! ? A girl who asks for help for a molester what she wondered about. ● Raw ... "I'm a molester ..." Appeal with a voice that seems to disappear, but no wishes reach the molester's ears! Do not miss the sneaky molester ugly in unprotected light blue panties!