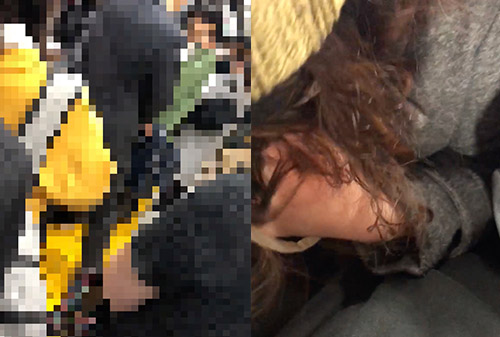 ※ This work is included in the package version "Molestation Record Diary vol.15".
Please be careful about duplication of products.

I started with a bad friend.
I strongly receive the colors of certain works.

I found a mini skirt JD of denim at the morning rush hour.
It was about 15 cm above my knees, and the thighs were so delicious that I felt delicious ... Today, I tried to push it from behind, but ... I went to Sulsul and the side of the chair. .

Damn! Was it useless today ...

A girl who comes close to being pressed by the flow when it is thought. . Hmmm, I'm not going to type ... But today I can't afford to look any further ... I'm going to naturally lower my body while thinking that I'm thinking of ... This is a perverted sex of a pervert But. .
Well, but there is no pretend to escape even if the hand touches, so let's try a trial.

Atari was more than I thought.

First of all, a little chubby thigh. This is a good touch, and as a young child, the skin is smooth. I feel that my hands are caught in my thighs ... nice ...
It's not like it hurts, it feels like the hands are wrapped.
And sensitive crotch .... No matter how good the child looks, it is not fun to touch the crotch, which is not sensitive.
It's a little too thick, so I took the time to search for the clit but ... but still I felt the crotch crook was erotic with me who would react with the pic when I trace the crack.
The crotch also feels a little bit steamy and feels good. . The part I can see is not wet, but when I put my finger between them, it looks like a type that gets wet and pulls a thread. . The hot feeling of the crotch and the wetness of the panty made it absolutely wet.

But above all, the most exciting thing was the appearance that I felt like I was exhaling breath, regardless of the appearance. . It is not a type of pretty child who is really sober and generally said, but such a child leaks his breath quietly and endures a molester ... it can be scared. .
A voice that leaks with patience that the lower half of the body feels like “Nm ...” which sometimes sounds in a breath of “Hmmm ... Hmmm ...” This is unbelievable! Because I want to see and hear that I do not take an upside down .... This child's reaction was Yokata ... I was able to erect.

From the appearance of the Tage who handed out as you wandered about the station, I would not like being perverted. Even though I thought that I was disgusted, I made my crotch warm and leak my breath ...

It will be too de M.

It was different from the target I was aiming for, but it was good because I enjoyed it than I thought. As it was a long skirt, I could also feel the pounding feeling of reaching the crotch.

All good if the end is good, it was just such a pervert.


(If you like a sober girl you will miss: personal rating 79)

・ About the model of this work, we are checking the age of 18 years old or more by the ID card
・ A person appearing in this work is a model and has taken pictures upon consent.
・ Contents based on this site terms of use.
-For completely original products, sending to third parties, secondary use such as sales will be prohibited at all
・ Returns and complaints are not accepted
・ It is fiction, and it has nothing to do with characters and shooting locations.
・ This work has no incidents related to criminal acts and criminal acts
・ This work complies with domestic law and foreign law and there is no illegal act.
・ Playing with Windows media player may not be possible due to codec. Please choose a player at your own risk. (VLC player recommended)